Greetings Fiends!
Thought I'd show some of the work I've been doing.
Random experimentations and revelations between working on bigger projects. 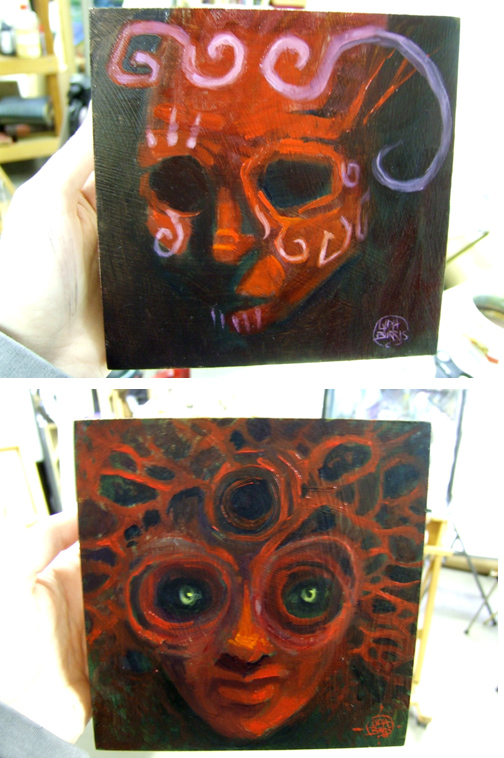 Two 6" x 6" oil on panel pieces. I had already started these a few months ago, but didn't go anywhere with them. They were flat and brown. I got my oils out again, and with full intention to use a complete and crazy spectrum of colors, I started with red and STUCK with it. Aside from using the under painting as a guide, this was pretty much stream of conscious like most of my works. 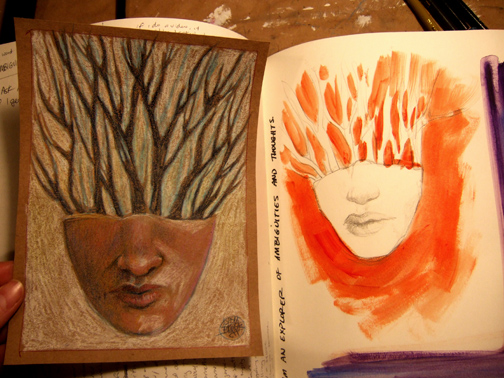 The other day my good friend Galindorf (link) showed me a work in progress - a sculpted head, and asked what she should do with it. Being silly, I said 'chop off the top part and have TREES coming out of it!' Needless to say, this inspired a vision for myself and I sketched it in my sketchbook with paint, followed by a colored pencil drawing a day or 2 later. 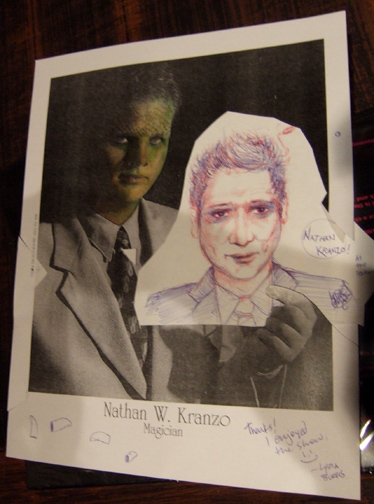 Last of all, I drew a portrait of Nathan Kranzo (the magician) during a lecture he was giving after a show at the Indy Magic Monthly show. (link) - I was at the lecture because I do the IMM programs , so I'm on the 'crew' I decided to use the opportunity to do a portrait of Nathan while he was lecturing - as well as manipulate a Nathan Kranzo photo on paper - (given to me during the show as it was part of a performance I volunteered for) - I added scales to his face and colored it with some travel watercolors. I cut the paper and made it hold my bic pen portrait of him, which I cut from my sketchbook. (more clear photo of the portrait below)

How to draw people while they are constantly in motion? Choose a common pose - While speaking to the audience, Nathan would often face forward with his lips slightly parted in talking. I usually take a mental picture, draw what I can, and wait for him to take a similar stance again - watching hard for subtleties in facial structure, memorizing details of the face before putting pen to paper. Watching and looking HARD (and memory) is probably 80% of doing a drawing like this. 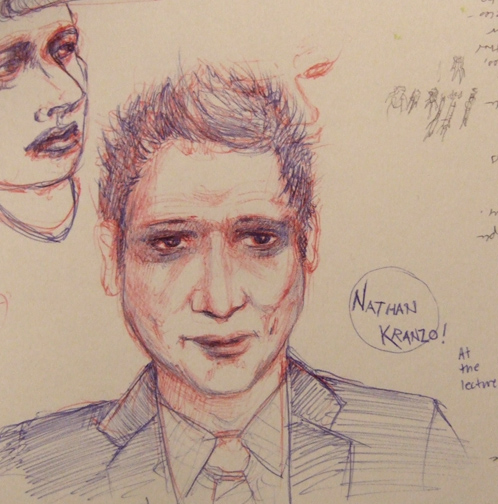 Thats about it.
Other news? Preparing to get prints for upcoming conventions and events,
trying to network, finding myself in all sorts of projects,
experiencing both frustration and undying excitement and gratefulness at being an artist.
I've done a lot of art research today.
Reading up a lot about Moebius since his death.
Posted by Lydia Burris at 3:15 AM No comments:

Snooping in other artist's studios (with permission of course)!

But I'm not here to talk about my writing habits...
I'm here to to bring surprise and mystery, confusion and ambiguity!!

STUDIO FEATURE BLOGS
I am posting to share my new endeavor.
I have become a guest blogger at the http://www.stutzartspace.com/ -
Where I am featuring the inside of other artists studios at the Stutz building.
I have over 20 artists interested in this project and counting, so needless to say, it will keep me busy for a while - and I have an excuse to snoop around in other artist's studio spaces - something I find inspiring and full of *Endless Wonder.* (Warehouse 13 reference there, if you haven't seen it, go to Netflix now and watch the first 2 seasons. NOW.)
Of course, this also means that if I find myself in a NON STUTZ studio, I will also be compelled to feature it on my own personal blog(s).
Check out http://www.stutzartspace.com/ for all things Stutz Artists,

For the specific studio features, check out 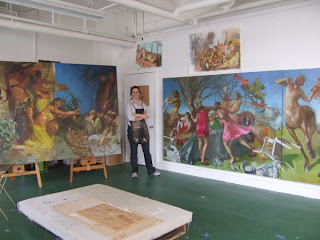 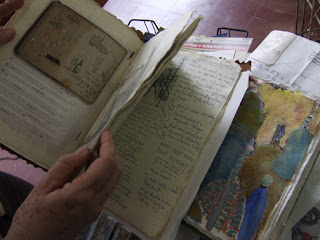 VIDEO
And while I'm here, I might as well give you a link to a video I posted recently -
of me painting on clayboard HERE 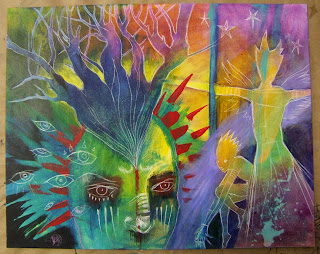 Posted by Lydia Burris at 2:32 PM No comments: