Despite getting addicted to some internet puzzle games this week, I have managed to get some work done! (bejeweled on facebook, 'trapped' on yahoo, last few weeks was 'shape shifter' on yahoo)
Last time I was in the studio (Sunday, I need to go back!), I did a lot of work and started a lot of new pieces. I managed to finish one personal work from my 'Miscellany' series, and at home I finished a commissioned drawing about vampire ducks of apocalypse. (I love bizarre requests!)

But FIRST, I wanted to share a publication I was involved in:
Cutting Block Press's "Butcher Shop Quartet II" - 4 short horror stories. I illustrated the front and back covers, and did 4 inside illustrations. The book is available for $16.99 - Free shipping to anyone in the U.S.! Check out the site HERE 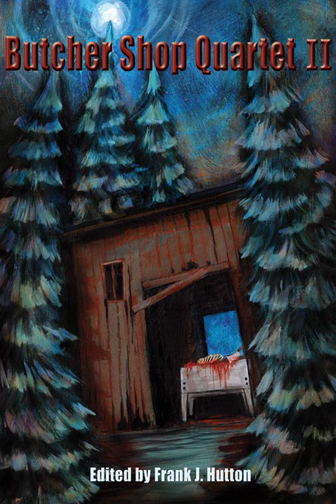 By the way, the stories are really great! I enjoyed reading them and illustrating them. 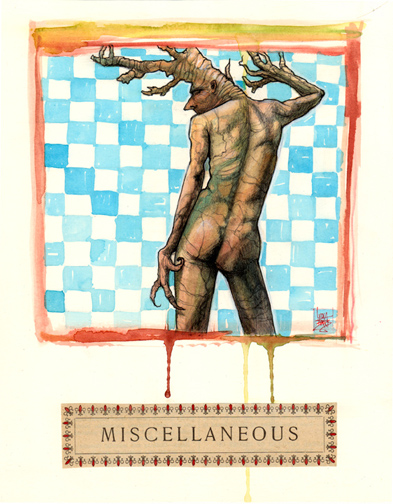 Featuring: Vampire magician - David Alusik (my lovely D), Barry Rice and hosted by Madame Esmerelda Fallendo!!
Theatre on the Square * OCTOBER 27th * Doors at 7 pm
Wear a costume for a $5 discount on the price!
For more info click HERE!
Posted by Lydia Burris at 6:16 PM No comments:

ART
Hallelujah! The studio is already having an awesome affect on me. I spent over 6 hours in there today makin stuff. I gessoed out the wazoo, I worked on 4 new pieces, I cut up thick paper into six 8" x 10" pieces and three 5" x 7". When I got home, I worked on one 8" x 10" piece with watercolors and pens to near completion, using a reference for a figure...
I am VERY excited, and I just can't hide it, I'm about to lose control and I think I like it. *breaks into dance*
WHY am I excited? Without the separate studio, I felt like I could work on art at ANY time, which also meant I could put it OFF at any time too. It has also been a while since I've been able to work for such LONG hours! Usually I get distracted at about hour 2, and go do something else in the house - but its about at hour 2 that I start getting really good ideas!
I will post pictures soon.

THE REST
The Juniper berries are attacking. Run!
Posted by Lydia Burris at 3:46 AM No comments:

Today has been great.
Despite the COLD and WET outside from 2 days of rain, I finally made it to my new art studio at the Stutz building. D came along and we got there right at 6:00, the time the building closes. This was actually good, because it forced me to find out the procedures for how to enter the building after-hours. The night guard controls the garage door for car access (temporary for unloading stuff), and then I had to find the right doors with key-card access after I parked on the street. I've never used a key-card before, its new to me, kinda sci-fi.
I DO get internet - which is great in many ways - one of the things I was thinking of trying was setting up a small web cam and streaming live video while painting.

I brought some more items, arranged everything, and started painting. I worked on a large painting I had started month's before - it now looks like a rainbow that ran into a briar patch and exploded. I forgot the camera, so pictures will come later!
I also stretched canvas on some small wood blocks, and gessoed them.

This is really going to help with my SELF DRIVE. 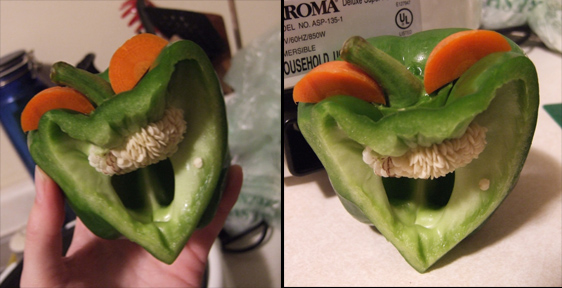 STUDIO:
Tomorrow I can get my key for the Stutz Studio building! I am very excited.
WHEN I have the studio, there will be portrait sessions. There will be strange art makings and weird art happenings. There will be creative experiments, colorful failures, and exciting successes.
AND its in walking distance to the main downtown library. *JOY!*

OILS:
I have recently revived my interest in my oil paints.
While working on the second Cthulhu-esque commission, I drifted off into that intense art state where time did not register. I painted until I was FINISHED, and realized that it was 3:30 am and I had not yet eaten dinner. I have not felt that state of art for a while, and I was so excited. I think I am ready to do some serious artwork.
Here is the outcome of that art session: 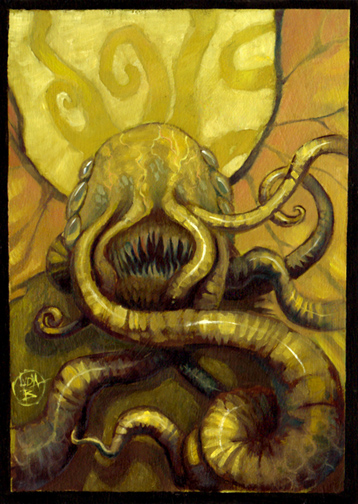 Recent EVENTS:
Yesterday was a big day for being social. First there was the 'Goth Picnic' - a different sort of social event for the goth and alternative community in Indianapolis. Finally, a chance to converse with my fellow darklings, rather than shouting at eachother in a nightclub. It was at the IMA gardens, I did NOT realize they had that much property in the garden! I shall have to return when I feel the need to escape the city and take pretty pictures. The day was chilly and the skies threatened rain with dark clouds, yet it did not rain. Perfect day for a goth picnic!
That EVENING, we attended 'vampire' themed club event (the theme was loose, but the cover was discounted if you were wearing fangs). A good night of music, sticking glow sticks in our noses, discovering a new tolerable energy drink ('Roaring Lion' or something) and of course, being social. It was good to see some out of town friends as well. :)

Friday, D and I attended a FREAK show at the library! The Blue Monkey Sideshow. A man hanging a bowling ball form his ears, someone lays on a bed of nails... I was quite impressed with the man walking, jumping, laying his hands and even his FACE (while a patron STEPPED ON HIS HEAD) all on a pile of broken GLASS. Very cool. And of course, there was Z'ja Dega and his human blockhead routine (we missed his 'through the tennis racket' act), and the ever impressive CREMBO - one of the best MC/Barkers I've ever heard. (who also does his own tricks when called upon) I need to upload some photos!

Today: I am dedicating to grading papers. Ahhh Teaching. Maybe a bit of art later.
Posted by Lydia Burris at 12:38 PM 1 comment:

Today has been full of all sorts of things.
First of all, I took a trip to the Indianapolis Museum of Art to prepare for my Ivy Tech class tomorrow. (art appreciation) I am creating a scavanger hunt worksheet to fill out.
While there I discovered a whole new section I had forgotten about, tucked away in the European art, up some beautiful stairs - before I had dismissed the area as being connected to the 2nd floor elsewhere and did not bother to climb them - turns out that small upstairs area was exclusive to the EU art area. A while collection of J.M.W. Turner drawings, many when he was a student! Really cool stuff. I wish I had more time so I could study them in detail. Maybe one of these days I'll actually go to the IMA for myself, and look at just ONE section, in depth. And maybe stare at the Hieronymus Bosch paintings for an hour too.

ANYWAY. I thought I would post my progress on a small painting I'm working on.
I have a private commission to paint 2 Cthulhu paintings, 5" x 7". After days of thinking and sketching and brainstorming, I finally came up with 2 ideas. The first one I've been working on is somewhat complex. (for so small)

The INTERESTING part is, this is the VERY first painting I've attempted in oil that is both FANTASY and has actual DEPTH. (A definable background, and not just splatters or a flat design.) There are a lot of reasons I've not done this before - first of all, I have trouble with depth backgrounds - I usually stick to interesting flat or abstract backgrounds. The second - having to do with oil - for the longest time, I had a 'purist' block with oils - forbidding me to use oils for anything other than painting from life. I was trained on oils that way, and anything I tried from my imagination just looked terrible. (this is in oils only! I have no block with any other media) So, its worth mentioning that this piece is a great building block for me. Perhaps one of the final nails in the 'purist' coffin. Speaking of purist painters, while I was at the IMA, I bumped into one of my painting professors from IU. THE purist - but I do not say that as an insult. She was a genius, and I learned some of my best skills from her. She also doesn't seem to enjoy running into past students... it was a quick conversation.

Onward, to the posting.

The drawing and the work in progress. 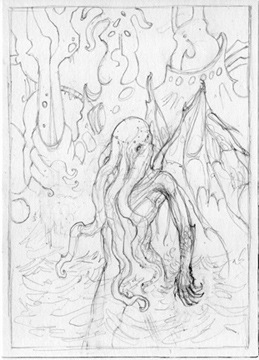 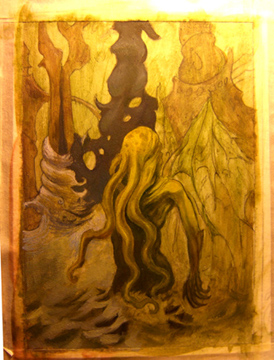 The final (I've done a few touches since then, like adding some darker waves behind him) 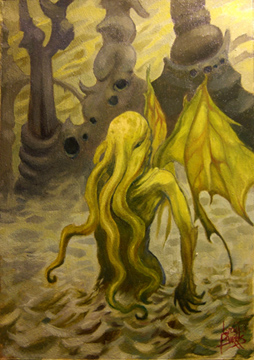 This is based on brief reading of the Cthulhu descriptions early in the H.P. Lovecraft book, along with the city of R'lyeh. (my own interpretation, of course)

That is all for now. its time for my past midnight snack. I was supposed to make soup tonight but I forgot.
Posted by Lydia Burris at 12:24 AM No comments: