NYC, and other things I've been doing on vacation

This past 2 weeks have been awesome (or almost 2 weeks)
D and I are visiting his family in Connecticut where we have
- played plenty of games in the evening like contract rummy, fill or bust, and upwords.
- eaten copious amounts of tasty food
- been VERY silly
- visited old buddies of Dave
- visited his friend's workplace: an awesome music studio where many awesome people have come to record music.
- had a big family get-together lunch where D got to see and hold his baby Niece!
- visited the sea wall
- seen a live band and a few tricks by a localish magician
- played duck pin bowling (my first time)
- Drove just into NY (not the city) to see JEFF McBRIDE - AWESOME MAGICIAN - it was a small intimate setting where he was even greeting people at the door - and we stayed for a 2 hour lecture afterwards. How awesome is that?! 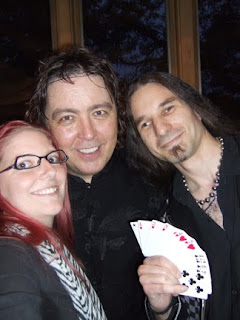 We also visited Vermont where we got to
- see my aunt, uncle and cousin
- play the Wii (my first time!)
- visit the Fairbanks museum of natural history and planetarium in St. Johnsbury.
Incidently... while in St. Johnsbury, we drove past the museum and decided to drive around the block so we could find a good parking space further back.... driving around the block on in a MOUNTAIN VILLAGE is not an easy task! We ended up on this VERY STEEP AND THIN CURVY hill going DOWN down down down and then wound our way back up the street... awesome and a bit scary but we ended up where we wanted to go. :)
The Fairbanks is this small museum with a bit of everything from geology, stuffed animals, plant displays, civil war history, cultural history (such as an egyptian mummy next to another section with a miniature Japanese temple display) , antique toys, and .... some paintings made from bugs - mainly moths and beetles, created by John Hampson - there is a Roadside America report about it HERE.
See image below - THAT is all made of moths and beetles. 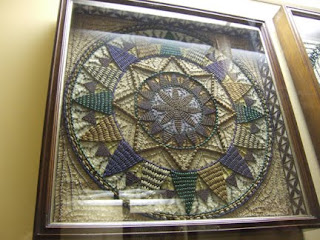 THEN
We visited my cousin Lily in NEW YORK CITY! I have never been there before!
Well, I take that back. I have a vague memory of being in NYC as a kid - so vague a memory I wasn't sure I made it up. I have been told that I was brought to the Statue of Liberty.
BUT. while we were there we
- visited a few galleries - one was the Joshua Liner gallery - very cool , the artists currently on exhibit were Sylvia Ji and Travis Louie
- saw a man dressed in a shirt composed of an old dirty ripped flannel and newspapers - he seemed normal (enough) and smiling, talking to someone until he sat down and suddenly he transformed into the most pitiful creature on the planet, and holding out a cup for money- now thats an art form.
- visited Lily's appt - tiny but nice!
- walked on a raised railroad track transformed into a beautiful walkway and garden. Awesome!
- Visited central park. Beautiful. Awesome. Rocks and hidden areas. We saw a man practicing his golf putting in a small cleared dirt area next to some bushes, a Rastafarian man selling hair wraps for money or weed, and we walked on a huge rock hill overlooking a small fair and from the top of the rock was a wonderful view of the city above the trees.
I had a blast. Today is our last day in Connecticut. we end it with a small family get together. We have done so much this year and I think I'm inspired and ready to hop back into art!
Posted by Lydia Burris at 12:31 PM No comments: Links to this post

Last weekend was Famous Monsters Con -it was awesome.
Pictures on Facebook. I was in a GREAT spot in the hallway. The neighboring artists to the left of me were Primo and Jay Fife. Dick Starr was to the right. We had a good time.
Even Mother showed up with one of her scary heads. 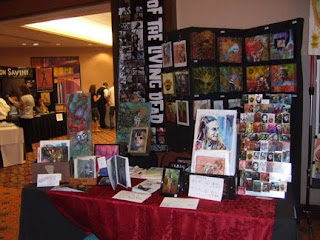 And this 2 week period D and I are visiting his family in Connecticut - and possibly some of my family in Vermont. Might get to NY too.

getting ready for the con season

PREPARATIONS!
Tomorrow is FAMOUS MONSTERS CONVENTION! This will be the first specifically ~HORROR~ Convention I vend at. I am very excited!

Tonight I have just finished creating about 87 magnets for tomorrow. I ordered magnet sheets almost a week ago, got photo printouts today, stuck them on the magnets, used an exacto to cut the magnets out generally, and scissors to smooth each edge.

I also ordered some new prints (finished today), and a second edition of my Brain Candy book (to be picked up tomorrow).
___________________
Today was my last art appreciation class of the once a week, 5 week Indiana tech class I'm teaching. I picked up my evaluation forms earlier, did errands, and then went to the IMA where the class was being held. This is the first time I've felt 'in my element' teaching this class - I rearranged the info I was presenting and changed my teaching style to allow less lecture, and more appreciation. I also feel the students were very happy and enjoyed the class, and did not want to shoot me in the knee cap, as I suspected my previous students wanted to do. (too much info, too much lecture, not enough appreciation... 5 weeks only leaves so much room to digest info) I still have to get my grades in by Monday eve ... with the monster convention and packing for a 2 week vacation after Monday, this should be interesting.
What else did I do today? worked on a flyer and some work for a comic project.

Oh. And a few days ago, I bought a 25 pound bag of CLAY. I have cravings to work in clay, and have for about 2 years (I even wrote the urge in my sketchbook 2 years ago) FINALLY. I have clay.

_______________
HERMIT CRAB THEATRE
the latest: Grünewald is now "PRINCE" Grünewald, as he has changed from his old green shell to a slightly smaller purple shell. He has also found his ZEN spot on the top of a stick. he LOVES to climb. But I have yet to see him eat anything.
Ronymus has been hiding all day and evening in a larger shell (while still attached to his old shell) so it looks like a sort of yen-yang of 2 shells flowing together. This is not the first time he has attempted to live in 2 shells. I wonder what he's thinking... does he hear the ocean in this shell? is it comforting? Is he looking for a larger friend to play with? Does he have SHELL ENVY???
Blake just likes to dig lately.
Posted by Lydia Burris at 2:36 AM No comments: Links to this post

While setting up at the Inconjunction show Friday, I fell in love with the art of Joseph Gubocki, his work featured on a table.
Absolutely the most gorgeous freaks of ceramic invention on earth; twisted hook limbs, misfits of nature gone awry, baby faces conjoined with monstrous crustacean bodies and hellish creatures waiting to burn the world (some of them were oil lamps)

Unfortunately he doesn't seem to have a website and I freakin FORGOT to take a photo of his table. GAH. 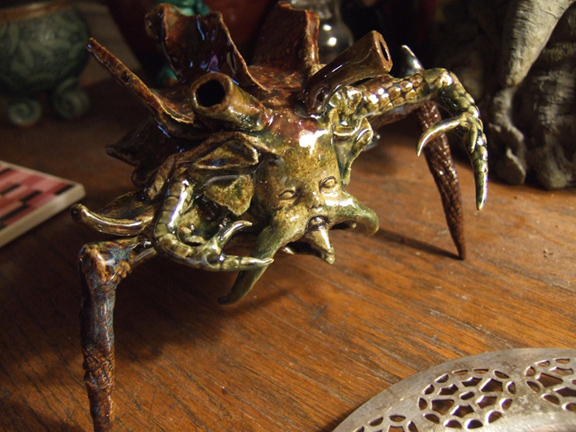 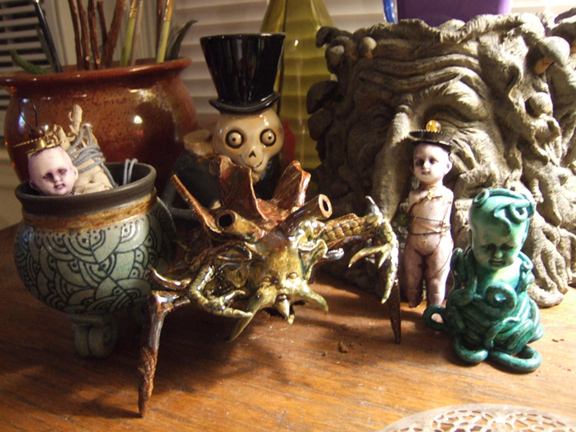 Posted by Lydia Burris at 1:42 AM 3 comments: Links to this post

First of all, Awesome News:

My work has been selected to grace the pages of the 40,000 Indianapolis Fringe Festival programs, buttons, advertisements and more - PLUS, the work will be featured on the GIGANTIC LIGHTBOX on the corner of Mass. Ave and St. Clair st.... The image here is just a teaser, the full image will be unveiled the Evening of Friday August 6th. This falls on a GenCon night - if you happen to be at GenCon - you'll have to swing by and check it out either at the unveiling or after! The image will be up for ONE YEAR. Huzzah! 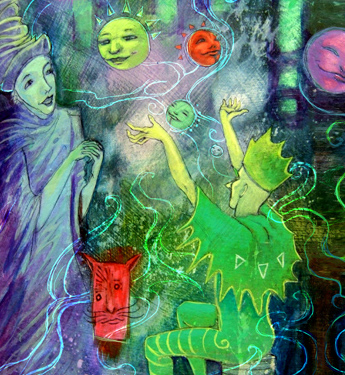 In other news, I am exhausted today!

Thursday night, Dave and I finally got out of the house and went to Tru (club in broadripple) - we danced and I sold some brain candy booklets, all was good.
Friday (yesterday) I set up some art at Inconjunction in the morning/afternnoon, went to the studio to work on a cd cover, then we went out AGAIN (2 nights in a row!) to see Slick Idiot with Mona Mur. Excellent live music, I havn't danced that hard in a long time.

Today, we were going to go to Incon, but its too pricy for our interests (we just wanted to walk around and talk to people) and I am utterly pooped out. I'm trying to get some stuff done tho.

By the way, did I blog about my new hermit crabs yet?

My niece had one, and didn't want it anymore - I thought the hermit crab was awesome, so I took him. I renamed him Ronymus (his prev. name was Pizza) - and after about a week and 1/2, I bought him a 10 gal tank (recommended by the pet store), 2 friends, and other things needed. I had fun filling the tank with things to use/play with. His 2 friends are smaller, one in a red shell named Blake, and one in a green shell named "Grünewald". I am sticking to a theme here. 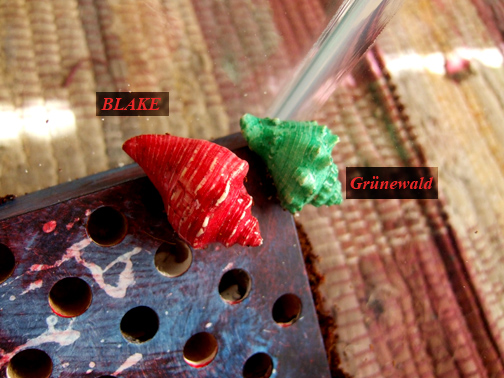 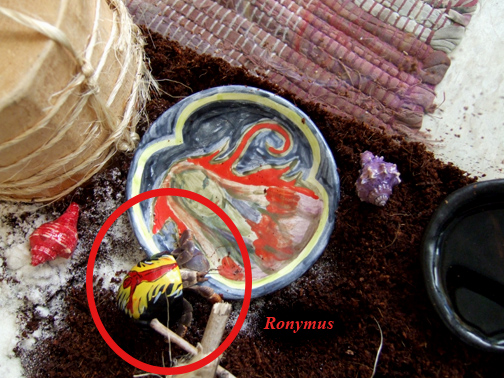 Posted by Lydia Burris at 8:57 PM No comments: Links to this post