Messages from Beyond, oh wait, nevermind 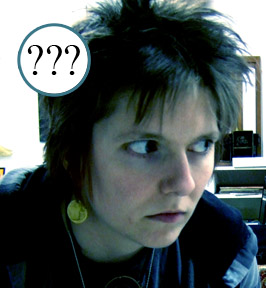 Have you ever experienced a happening that was so temporarily bizarre you had no choice
but to blame the supernatural? And moments later, are able to discover the real  answer?
I was reminded of this type of experience this morning when I got on the desktop to check
messages. Then it happened. I was startled but not perplexed, as this isn't the first  time.

Let me first explain the first instance of this, before I knew what it was.

I was sitting on the computer in silence, minding my own business.
I heard a strange crackly noise. No, not a noise, it was a voice. A faraway deep male voice,
mumbling incoherently in a southern accent. Muffled, but still very audible. I was curious
but not freaked out. I looked around the room, and after turning off the speakers, found
out that the source was my computer. I figured that on one of the many websites I had up
in tabs, a video had begun to play without warning or something. Systematically I checked
all my tabs, nothing. I closed facebook. I still heard the sound. I shut down the internet all
together... I thought that took care of it, but after bout 25 seconds, it started up again. I
strangely thought perhaps it was possible someone had hacked my computer, so I closed all connections. Still, I heard it. The ramlbing thoughts, spoken the
way I would imagine a lonely trucker with a lot on his mind would talk - broadcasting to
anyone who would listen. I think I heard speach along the lines of  'Let mother nature
take care of it'  (or at least thats something I heard today.)
ANYWAY, my point is, I was extremely confused and started even pondering the
possibility of messages from beyond. I am a fairly skeptical person - and I also thought about
the possibility that radio signals could maaaybe get picked up with my speakers, but I
didn't know for sure if that could happen, so my brain was thinking of any explanation
possible and impossible.

There are 2 other instances, and then you can tell me yours.


*Ring Transfers Through Solid Matter*
This happened ages ago, when I was in college, and engaged to my ex (still friends tho!).
We shall call him Mr. R.
I had a beautiful little engagement ring with a sapphire and 2 tiny diamonds. We were
standing in the bedroom, and I was in the process of putting my ring back on from
washing hands (or some such) and I dropped it. I did not see it ANYWHERE.
Mr. R and I spent the next 20 minutes searching the floor for said lost ring. There was
carpet on the floor. We checked to see if it rolled under the bed, furniture, etc. NOWHERE.
I was getting quite worried. I remember that when it fell, there was no distinct 'plop' of
something falling on carpet. There was almost an absence of sound. More of a 'flooo'
sound. We suspiciously started checking the bumps in the carpet. Had the ring somehow
TRANSFERRED through solid matter and was now sitting somewhere UNDER the carpet?
Being in College and highly open minded to strange physics and metaphysics, we were
seriously contemplating that we had just had an encounter with loose molecules.
Just when we were about to admit that the universe is not what we think it is, I found the
ring in the rolled up cuff of my pants.

*Phone in the Ether*
The last one was when my friend Miss G was staying at our place.
There was a fantastic storm that night with terrifyingly wonderful thunder, and heavy rain,
excellent flashes of lightning.
In the morning, when she was preparing to head back home, she could not find her phone.
After searching the living room, we decided to check the car. Perhaps she had left it in
there.
D, G and I get to the car, and and we call her phone. We can hear it. Success!! We begin to
search the car but cannot find it!! Did it slip in the seats? No. Did it fall under the seats?
No. In the door pockets? No. Wedged in the weird places that only smaller things get
wedged in? No. WHERE IS IT!! We hear it, the muffled ring tone mocking us in our failure.
We check all the areas in the car at least 3 more times before (again) contemplating the
supernatural or weird physics. And yes, there was the thought that perhaps the phone
had slipped into another dimension, and was calling out to us from the Ethereal world.
We stood outside the car and called it one last time. It was on TOP of the car. ¬¬
We hadn't thought to look there because of the storm. What phone in its right
construction would still be working after THAT downpour?? Water damage eh? Well,
apparently strange physics were still involved, it just didn't involve side stepping into the
space between worlds.

PS:
-In other news, I'm enjoying being more talkative.
-Gonna play with photography tonight. Hurrah for getting my own photo references for people!
-Organized the studio for the ONE FLIGHT UP show tomorrow, wow! this place is
wackily disorganized.
- Welcome to the new title for my blog. Its the same title as my OLD blog.
"Paradoxical Sacrosanctity". Sacred Paradox. At least, paradox is sacred to me. So is silly. I could almost have named it Sillilical Sacrosanctity.   Ok, I made up Sillilical, but doesn't it roll of the tongue nicely?
Posted by Lydia Burris at 6:38 PM