This month is too crazy to update. Working 3 part time jobs at 3 separate universities, attending conventions,trying to keep up with my own art and commissions and projects, along with saving time for family and other stuff... But I can't complain. I love all of my part time jobs, and the stuff in between, and somehow I'm able to save time to watch old episodes of BONES. (I think its my sanity saver right now)

Motor City Nightmare's convention
This past weekend I took my arty wares to Motor City Nightmares convention in Novi, MI. We had a blast, hung out with friends ~ new and old, and made a lot of connections. Funny, I ended up making 6 little book page paintings while at the con - the four I did at my booth sold, and two I did at the after party on Saturday were given as a thank you for good food, drinks and conversation.
I was invited to help judge a tattoo contest. Awesome except for the very sore looser who told us we all sucked after stealing the mic even though I tried telling him his tattoo was awesome, it just didn't happen to win. {rant removed}. I traded a sketchbook drawing with another artist known as 'Saint', discussed awesome
movies with Marv Blauvelt of " Muscle Wolf Productions I had Alex of "
Metal Artisan Studios" manipulate my jacket (photo at bottom), Ate dinner one night with Artist Tony Steele and his wife Kay Steele,awesome people whom I know from previous conventions, and another dinner with long time friend Barrett - who happens to live in MI., I ate a really awesome chocolate cake-pop, made by last year's Miss Motor City Nightmares, Alloy Metallic. (I wanted to buy some but time slipped by too fast). I forgot to go chat with Kyle
Gas from Tenacious D (my one regret that weekend), I participated in Skullibration (a page full of skull drawings to be raffled), and so much more.
Photos can be seen on my Motor City Nightmares facebook album.

Here are a few drawings I made while there:

2 of the 6 book page paintings 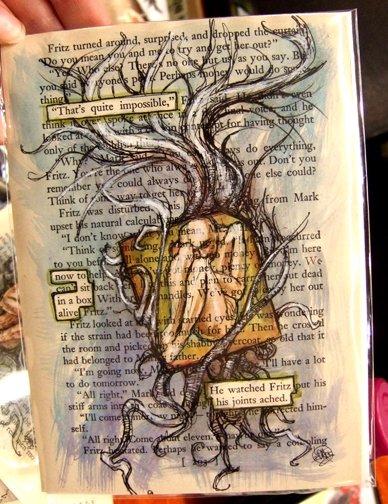 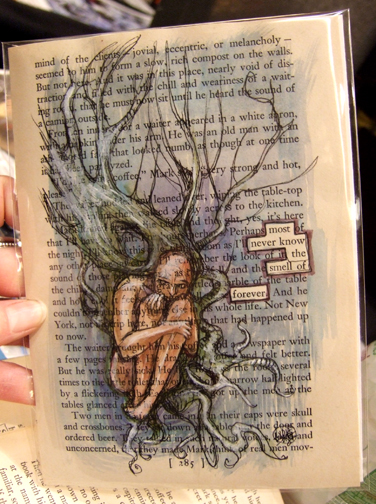 2 sharpie drawings in the back of my brain candy books 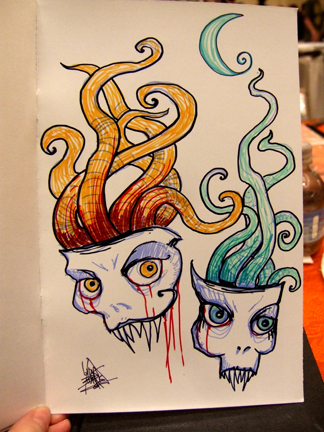 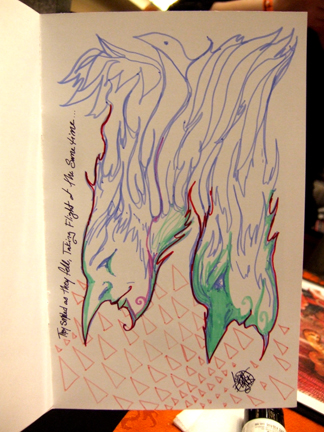 They smiled as they fell, taking flight at the same time...

SCALES!
Had my jacket manipulated - scales added, and gold studs at Alex's suggestion. 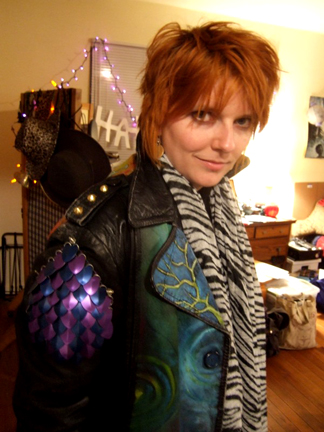 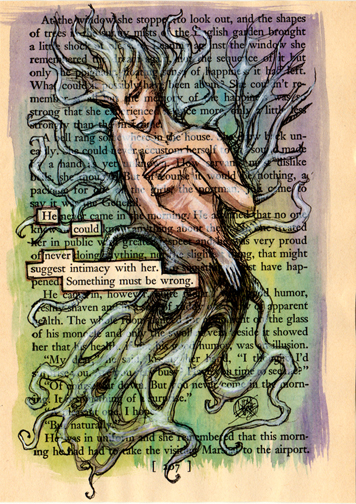 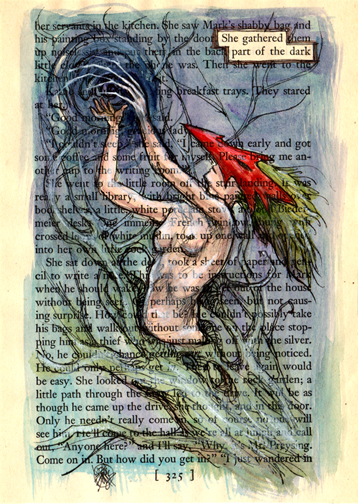 ___________________
What else art progress related? Got the go-ahead for a fairly large commission project, finishing up projects still hanging in the air, still organizing the stuff in mothers studio - I condensed the interesting objects into one bin... well, the interesting metal and industrial objects anyway..., still need to grade art appreciation papers, scanning in works, updating/posting things on Etsy, getting inspired others's art, still looking for an affordable studio downtown and I'm going to stop right there!
Except, one more thing. Thanks to D for making a lovely yummy manwich dinner on our Month-aversary! (YES, its art related can't create without food!)
Posted by Lydia Burris at 11:20 AM