Picking up momentum, building my wings


Tonight.
Am I talkative again?
Do I want to write?
Do I want to post this online?
I don't know and I shouldn't think about whether or not I want to share my thoughts until after I have written them. These are the things that block me.

Today was a day of rest. (And playing games with friends)
My commission (due for  Horrorhound) is done and despite the fact that I have another commission overdue (with friendly deadlines) I am free to create whatever I want for the upcoming convention. I can't believe my stock of works on paper actually thinned a bit.

Not that I don't believe in myself, but its nice to start seeing wheels going in the direction I've been trying to push them the last 5 years.
Another thing I can't believe. I moved to Indy in June/July 2007. I've been in this apartment for 5 years. The waitressing gig (and other odd jobs) I got in the beginning was meant to be temporary until I found teaching work, and it lasted 2 years. I did find teaching work briefly, and occasionally still do, but not exactly what I was originally going for either. I teach university/college art appreciation but I'd rather be teaching people how to draw and paint. I am so GLAD I found the appreciation jobs however, as now I have a lovely chuck of art history burned into my brain. This has increased my love of the art world and all of it's history 10 fold +++.
But my true WANT, was not to teach (I love teaching, just not as a career), but to live off my art. So, I sprang for it. I jumped off the cliff. I have truly lived by the philosophy that I should JUMP first and build my wings on the way down. It has been hard and at times I could not have done it without the support of my boyfriend David. (and many others) I am still building my wings but it seemed just before I hit rock bottom, I was able to swoop up. I feel like I am gliding now... low to the ground, there are plenty of risks and obstacles and sharp rocks, but I am still building. If I can make it this far, I can eventually learn to fly. I look around me and see that I am not alone. So many other people building wings for themselves... and so many of them are gliding like I am - ready for bigger and better things... all excited... grinning at eachother in anticipation for whats to come next. 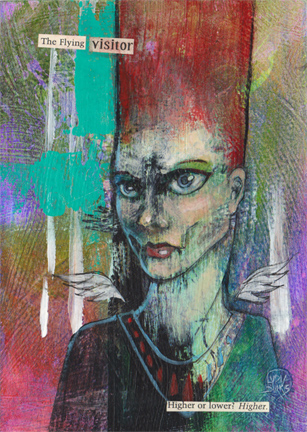 "The Flying Visitor"
5" x  7" mixed media on paper
one of the new pieces.
Posted by Lydia Burris at 2:15 AM No comments: