Life is (again) travelling too fast for me to attempt recording it in words. Even less so for words gone public. But here is an attempt, because sharing is what's for dinner. Wait, no, that was veggie burgers. Veggie burgers were dinner. I'm rambling. Let me post a few pics.

This is a wee different from my tree people and crazy creations... but drawing from a source sometimes refreshes my brain. I am also exploring a childhood obsession - as I once wanted to be an entomologist. (Being an artist was always a given. There was no choice there, besides, I thought EVERYONE was automatically an artist anyway and that it didn't really count as a solo aspect of a career. Not that I didn't think it was a real job, I just assumed art was a part of every picture. Always. Ok, maybe I should save that thought for another day.)

Here are some bug pictures I've done so far. 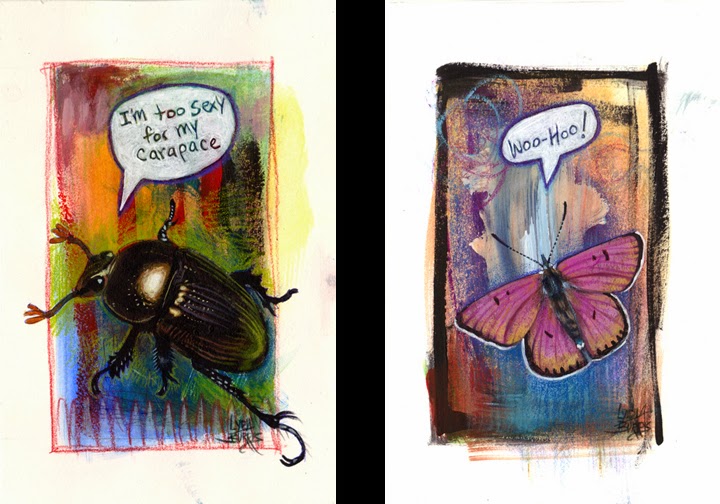 These are the first ones I did and had them hanging in the studio. The word bubbles get my giddy giggly, and I'm having too much fun. The abstract backgrounds let me play, and the illusionary realism gives me a chance to hone in and practice the skills I fought so hard learn. Its refreshing in so many ways. I told another artist that I wanted to turn it into a series, but that I often had trouble staying with one thing. She then did a very good thing and CHALLENGED ME to create 100 bugs before the next openhouse event (April 2016) I accept this challenge. I may change styles a bit, and I might include some critters beyond the bug spectrum, but I will do it! I'll try to put a bit of humor in most of them.

By the way, the 'Woo-Hoo' butterfly sold at the openhouse, and the purchase came with a very touching story, and served in part as a memorial to someone special. No greater gift can be given than knowing my art can serve such a high and beautiful purpose. The pill bug was next, and has also sold. Again, the purchase came with a story, something that touched the buyer on a personal level, and inspired a grand conversation about critter obsession in kids, inside jokes and banana slugs. *GRIN!* 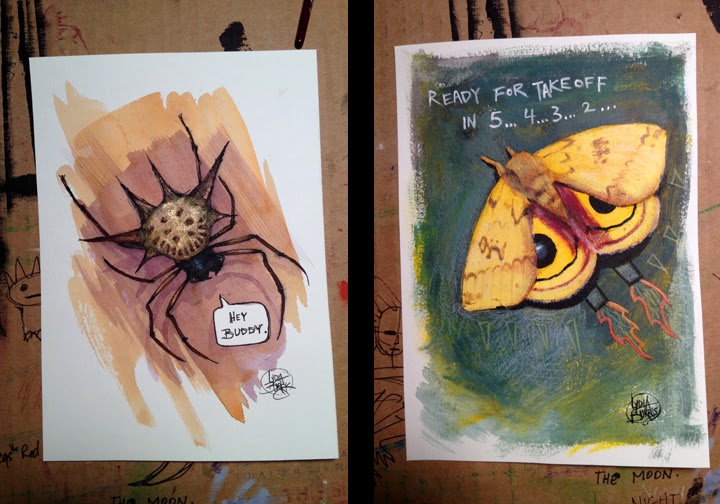 ("Hey Buddy" and "Io Moth, Ready for Takeoff" - both 5"x7" First is ink, watercolor and acrylic, second is acrylic and colored pencil )

These two were the most recent. I learned not to try and think of what I want the creatures to say while still in bed early in the morning. I swear it took me 30 minutes to land on a phrase. I came up with too many choices!! I gotta remember to keep that part loose and spontaneous.


SO, what inspired this Series?
Many things led up to it, but the most direct inspiration came from making this little painting here: 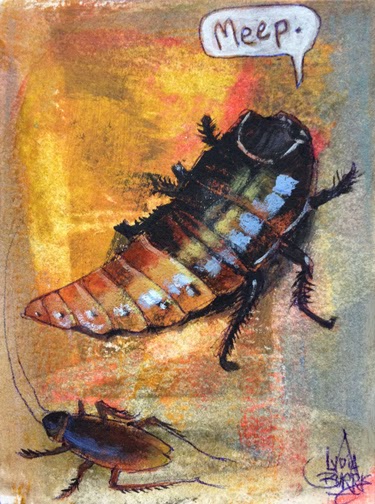 I was vending at Horrorhound Weekend in Cincinnati in March of this year (2015). I had been chatting with Terrance Zdunich (creator/writer/actor in Repo the Genetic Opera and Devil's Carnival) If you are a fan, you probably know he likes hissing cockroaches and features them in his "Molting" comic (its awesome, go check it out) I happened to be doodling on a tiny piece of paper when he came by. Jokingly, he said he wanted to see me paint some cockroaches. So, I did, and then gave it to him. Its usually the unexpected prompts that spin me in a new direction. In fact, it was a commission to paint cats last year that led me to this style of abstract+realism with acrylic and colored pencil.

I hope I can keep the groove going. Don't hesitate to poke at me and demand to see more.

And of course, the ones that havn't sold yet are available.

p.s. Don't worry, I'm not giving up the other weird art stuff, I'm STILL working on tree people and surreal abstractions of the mind and heart. I've got plague trees and surreal portraits in the works RIGHT NOW! In my next post, I'll give an update on all that stuff. Along with other new things I'm playing with, like fabric and drawing with the sewing machine. I'm so... scattered, but I'm FREAKING IN LOVE with being an artist right now. I've accepted that I'm not a single style kind of gal. Let variety BE my style. Now I just need someone else to figure out how to put it all to good use!

Posted by Lydia Burris at 2:49 AM No comments: